RIO DE JANEIRO — Down the quiet, tree-lined Rua Gonzaga Bastos, less than half a mile from Estádio do Maracanã, the custodian of this city’s only mosque was preparing for the busiest time of the year.

Mohamed Zeinhom Abdien, the custodian, was sitting at a desk opposite messy piles of boxes containing thousands of leaflets about Islam written in Portuguese, English and Arabic.

The observance of Ramadan, one of Islam’s five pillars, is a religious obligation in which Muslims fast and forgo any liquids from dawn until dusk over the course of a month. The month begins Saturday night, and Abdien’s usually quiet mosque has been inundated with newcomers.

“Normally we have 100, maybe 150 people here every Friday to pray, after the imam gives the call to prayer in Portuguese,” said Abdien, an Egyptian-born tour guide who moved to Rio 21 years ago. 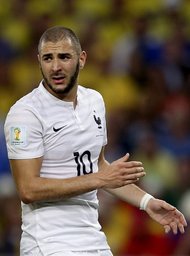 France's Karim Benzema is one of the dozens of Muslim players still in the tournament.

“But the World Cup,” he said, spreading his arms at the dozens of boxes, “it means there have been many Algerian fans, TV presenters, even a few players.”

This World Cup in Brazil has drawn thousands of Muslim fans — from Algeria, Bosnia and Herzegovina, Iran, Nigeria and beyond — and Ramadan, which is pegged to a lunar calendar and begins a bit earlier in the Gregorian calendar each year, is due to start just as the second round opens.

Ramadan involves acts of charity and increased prayer, as well as changing the body’s schedule: rising early, eating and then breaking the fast, with a meal called iftar, after the sun sets.

The month, however, should be more complicated for the dozens of Muslim players still in the tournament, including the French striker Karim Benzema and Germany’s Mesut Ozil. With the humidity and high temperatures in Brazil, especially along the northern coast and in the Amazon, an inability to stay hydrated would appear to put those players, and the teams featuring several Muslims, like Algeria, at a disadvantage in the knockout stage.

Maughan led a working group that examined the effects of fasting on athletes at the 2012 London Olympics, the last time Ramadan coincided with a major sporting event. He found that fasting had an effect on athletes competing in the events requiring the greatest strain, like the marathon, but that the impact was relatively small over all.

The problem lay in trying to measure the effect in a complicated, multifaceted sport like soccer.

“There are so many variables in football that it would be almost impossible to show an effect,” Maughan said.

He added: “In track athletics, 0.1 percent or even 0.01 percent may make the difference between winning and losing. In football, there are many factors affecting outcome, but games are often decided by the smallest of margins.

“It might be fair to say there is no large effect,” he said, suggesting that a team would not have a significantly improved chance of beating a powerhouse like Barcelona even if all the Barcelona players were fasting.

Ahead of this World Cup, FIFA commissioned several studies into the effects of fasting.

“We made an important study with the doctor of the Algerian Football Federation, and it was very positive,” said Dr. Michel D’Hooghe, the chairman of FIFA’s medical committee and a member of its executive committee. “If you do it intelligently, then you can adapt perfectly. Before the sun comes up, they have enough hydration to go on through the whole day.”

Islam provides some exemptions to fasting for Ramadan, for the sick and for those who are traveling, and the United Arab Emirates’ soccer team was granted an exemption during the 2012 Olympics by the country’s highest religious body on those grounds. Muslims are also permitted to catch up on missed fast days at a later date, although this is sometimes frowned on in the Middle East and parts of Africa.

A spokesman for the Swiss team, which has several Muslim players, including Bayern Munich’s Xherdan Shaqiri, said that it had made no special provision for Ramadan and that none of its players would fast until after the tournament. The French team was believed to have the same plan.

“If I was responsible for these players, I would make use of the possibility of an exemption,” D’Hooghe said. “I have the greatest respect for everyone’s religious convictions, of course, but from a purely medical point of view, it is better to have regular hydration.”

Some players, however, said fasting might actually improve performance in the long run. The brothers Kolo and Yaya Touré, who are Muslim and whose Ivory Coast team was eliminated with a 2-1 loss to Greece on Tuesday, have frequently spoken about their faith, fasting and its benefits.

“After that, the body just starts to” adapt, he added, “and you feel really happy. You clean your body as well, and you feel even stronger after Ramadan.”

Yaya Touré, however, who also plays in the Premier League, for Manchester City,told The National, a newspaper in the United Arab Emirates: “Fasting? Have you seen the weather? I would die.”

Still, Abdien, the Rio mosque’s custodian, was preparing for players as well as fans to visit over the next few weeks.

“Every evening we will have iftar for the people, so we will have the feast here, have lessons about the Quran, and we will pray,” he said, adding, “When you come here in Ramadan, you can feel like you are in a Muslim country.”

Abdien said he hoped Brazil went on to win the World Cup, but on the issue of whether Muslim players should fast, he was clear.

“They think they have permission not to fast until after, but some of them prefer to do fasting even when they play,” he said.

“Why? It’s the religion,” he said, pointing to his chest and then his temple. “It’s in the heart and the head.”